Beginning on March, 5th – in three days – Twitter starts to push users and clients from Twitter API 1.0 to 1.1. As you might have read already this means there will be quite some restrictions for clients which “only show the timeline” (and are not social media analytics and such f***ing stuff).

What are the most important parts?

First of all it’s about development at all. The new API is quite similar to the old – but as always there are the small changes which give headache. @Failabrion ported all used API calls in Nymphicus for Mac already and the new version is in review currently in the Mac AppStore (so we assume it won’t be available on tuesday but it’ll come).
With the Windows version developed by me it’s a little bit more difficult as I use an external library called “Twitterizer” – and this one is now discontinued over the massive needed work on the 1.1 transition. I already migrated it myself in most of the parts but some of them still don’t work (getting lists and saved searches for example). I hope to get most if not all working again till tuesday but no gurantee. Technically this will mean that Nymphicus for Windows 1.x is deprecated starting March, 5th and to continue using Twitter you have to upgrade to 2.0 (which I will push out regardless if feature complete – I am just in a hurry now).

The second part are the Display Requirements – there are easy ones (like the timestamp now shall be clickable to open the tweet in browser) but some are quite hard. So connecting to other networks is forbidden (no more send to Pocket, Instapaper, …). For the Windows version the worst part is that mixing Twitter timelines with other services like Facebook or App.net is a no go. So in the Windows version I now have two View types – one for Twitter and one for the rest of the world. Goodbye one of the greatest features of Nymphicus for Windows and thank you Twitter!

Besides those rules there is the third one – and this one is even worse than the others: Twitter just doesn’t like us developers to use their API to build great clients. Even if we do with old clients still having the permission (like Nymphicus does) there is the 100.000 token limit – and as the testing version is free I have no idea how many are left (I assume quite many – I just don’t know!). This means even for the paying users of Nymphicus I can’t guarentee that Nymphicus will work with their account. And why is this the worst part? Well – because I am just pissed completely by Twitter and if I wouldn’t have promissed otherwise I would simply drop Twitter at all from Nymphicus for Windows 2.0! But I promissed and so this evening and maybe monday evening I hope to get Nymphicus for Windows 2.0 with API 1.1 inside released with all (allowed) features working. This will be quite some hard work as Twitterizer is not my own code – and changing someone else’s code who did do it in a quite advanced way (my own App.net libraray is much more simple) is just hard. I hope anyway to find the last open issues till monday…

Personal note: I completely stopped using Twitter myself in any other way than informing about Nymphicus updates and sending App.net invites (by the way – I have many of them –  just ask :)) and am very, very happy with App.net now. They do love us developers, the APIs are straight forward and the overall feeling is just great. And with the free accounts being available since monday I do not miss many of the followings I have had on Twitter. 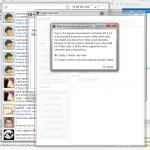 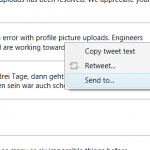 Send to menu before API 1.1 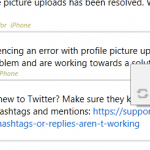