Nymphicus for Windows 1.4.3 has been released

This release took quite some days an has not one single new “real feature”. When I released Nymphicus for Windows with Tweet Marker support as the first and only Windows client at all the number of users increased dramatically – this is awesome. On the other hand quite some of you found bugs having been unheard of before. And this is what 1.4.3 is all about: fixes, fixes and fixes.

And this is also what all upcoming 1.4.x releases will be – if you find more bugs (I don’t hope so but am realistic…) they will be fixed – and no or only features will be added so we are now in something like a “Snow Nymphicus” phase here 🙂

In parallel I do extend my work on the 2.0 line which will be – as promised – all about design. Many of you like all the  features Nymphicus has but the current design – what shall I say… Those following @liGhun might have seen already some first screenshots and mockups and this will be the place where you see it first.

That said here the changelog of Nymphicus 1.4.3

This minor release mostly covers some bugs which might cause crashes but also includes some current user wishes: 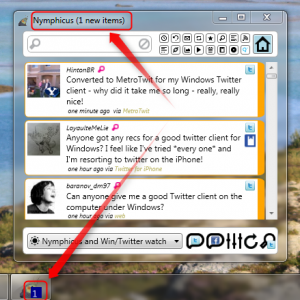 (and if you read the tweets in the screenshot: yes, I do love the design of MetroTwit ;)) 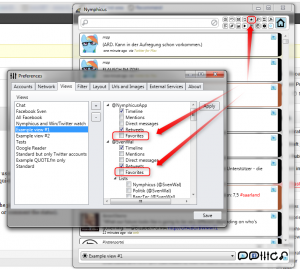 Some thoughts about Nymphicus for Windows 2.0

First of all thanks to all the users and testers having given feedback in the last months and weeks. As a result I have collected quite some ideas about what a Nymphicus 2.0 would be.

The short version: it’s about design.

First of all my current plans include to get rid of most of the many buttons we now have (and thanks to your feedback already know where it will be going). Back when Nymphicus “only” used to be a Twitter client the buttons made sense and were not that many. But with extending to Facebook and Google Reader (and maybe more in the future…) the buttons flooded the interface.

Second is composing messages. A quite often wish has been to include the compose textbox directly into the window instead of opening a new small one – so composing is now be planned to be on bottom of the main window.

Third is multi column view. It took quite some time till some of you finally convinced me that Nymphicus should have the option(!) that more than one View should be shown at once. This is – as seen from the coding – a small step but it’ll change dramtically who might be happy with Nymphicus (as it’ll be optional it’s about more happy users.

Fourth is the final completion of the longterm wish about integrating Tweet Marker. In this case all the API calling stuff is already in Nymphicus since many months but it has not been easy to bring the Views concept together with traditional approach of Tweet Marker (one column per type). I have now the concepts but it will be quite some coding till it’ll work. But maybe (depending on my free time the next weeks – all this stuff here is my hobby next to my fulltime job…) I might put an intermediate 1.4 with “only” this feature. But this is no promise…!

Fifth is something I am not sure right now. The downside is the number of known installations and the number of received license purchases – well – differs a little bit to much in my opinion so I think about adding payment reminders within the Views (something like every 50th entry or so). This is something I would like to avoid but in the end it looks like… 🙁

Finally a personal note: thank you guys for using & feedback – I really appreciate every feedback!

Nymphicus for Windows 1.3.1 out now

While working on the next major update of Nymphicus for Windows with its than to be reorganized user interface I decided to release an intermediate release with some smaller enhancements.

First we have now a “mark as read” feature available so you can see what you already made (which will be even greater later on when Tweet Marker will be activated).

Second is the enhanced conversation view. The old one was great but no one did find the buttons to activate it. Additionally you can now also see conversation which have not been your own.

Finally the user icons in Twitter are now cached to your local hard disk and because of this Nymphicus is even faster than it has been already.

As always I created a short video to show you the new functions on actions:

Finally we announce today the immediate availability of Nymphicus for Windows 1.3 with its three main enhancements:

Additionally I spent really much time on stability (which became an issue with my up to ten accounts I use personally) and next to that on performance. It’s even faster than it has been before.

Also I used the great service unshort.me to unshorten all links in tweets. But this service has been discontinued recently and so I reenabled my “old” code doing it on my own and we are up and running again – and that also much(!) faster.

The next release I am already working on will be mainly about interface refinements – I have had some great feedback with awesome ideas on how to reorganize the interface which has been quite cluttered with all the new account buttons added recently.

Finally I have to say I had a serious server crash last week here on my dedicated server (for the pros: I ended up needing to start over with fresh kernel & Grub configuration) and there might be some issues left. So if you encounter anything not looking right here on the webpage let me know…

Nymphicus for Windows – next steps

Now that the internal interfaces in Nymphicus for Windows have been successfully updated to be as flexible as possible to integrate new services into Nymphicus the main question for me is: where to start?

Of course Google+ would be my first choice but Google still has no real API to access it – I really can’t see what they are thinking about how to become a competitor of Twitter and Facebook if they miss such an important feature. And as far as I can say the Google+ usage is already decreasing 🙁

So I picked up a user request and decided to add something completely different for a combination unseen on the market right now. I do now add Google Reader directly into Nymphicus (including the complete Views-concept and so on). The great thing that my first own bigger desktop app I ever did is my open source client to Google Reader so I have the integration done already for simple retrieval of unread items. I plan right now to make a small release quite soon with this simple solution and then go a step forward.

This step will mean I already invested now quite some hours into my next (and planned since many years…) project which will be called Meneré. Meneré will be a feature complete Google Reader client with a complete new underlying library for communicating with Google Reader.

In general you can top wishes about services, social networks and so on now you want to have been added. LinkedIn will be sure one of the next too…

Nymphicus for Mac 1.2 has been released

Nymphicus for Mac now finally also reaches the 1.2 release. In difference to the Windows version it stays (for now) as Twitter only client but has massively improved performance as well as a slightly revised cleaner interface.

Really, try the new version, the speed is awesome now!

Yes, Nymphicus for Windows 1.2.1 is already out and has quite many new featues:

Or have a look at the video showing the most important changes:

Today Nymphicus for Windows has been released. See the following video on what’s new: